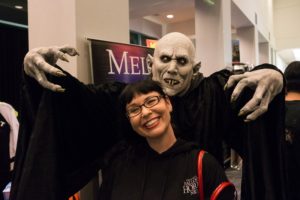 At 14, my two favorite worlds – Goth and Horror - collided for the first time when I saw The Hunger.  In a visually disturbing yet gorgeous piece of cinema, the opening sequence of the movie switches frantically between Bauhaus lead singer Peter Murphy singing Bela Lugosi’s dead while hanging onto a metal fence, and vampires Catherine Deneuve and David Bowie slashing open the necks of their unsuspecting victims with sharp edged ankhs they wear around their necks. When at 19 I found myself at the infamous Sunset Tattoo shop in Hollywood on a whim getting my first tattoo - I knew exactly what to get – the ankh from The Hunger.  My love for horror and especially vampires was immortalized forever that day.

My love of vampires has only grown more ravenous with time - so for the next few weeks, we’ll be spending time with the vampires of The Hunger by Whitley Strieber, Salem’s Lot by Stephen King, Sunshine by Robin McKinley, 30 Days of Night by Steve Niles and Let Me In by John Ajvide Lindqvist.  Finally, we will learn how to defend ourselves against bloodsuckers with Liisa Ladouceur's crash course, How to Kill A Vampire.

We’ll kick off this vampire party with Salem’s Lot.  I recently fell in love with Stephen King again as an adult when a friend suggested I read his book, On Writing (I suggest you read it too).  Obsessed, I quickly jumped to Salem's Lot.  As I read, I remembered why I loved his writing to begin with – it is authentic, unapologetic, intelligent, terrifying, gross and spiced with wicked humor.  King's ability to build tension slowly from scene to scene until it erupts into breathtaking horror (which he expertly does in this novel) is exciting to experience both as a writer and a reader.

Salem’s Lot, first published in 1975, is a book about fighting demons – personal demons and also unfortunately for the town of Salem’s Lot, Maine, a very real demon that must be defeated.  The novel revolves around main characters - Ben Mears (a writer still reeling from the accidental death of his  fiancée), Father Callahan (a priest whose hands shake from booze and whose faith shakes from doubt),  Matthew Burke (a smalltown teacher wondering if his usefulness has past) and Mark Petrie (a young boy who must grow up fast when he discovers the imagined monsters of childhood really do exist).

The other characters of the book are also wrapped up in fighting personal demons which makes Salem’s Lot the perfect feeding ground.  The residents are too distracted to notice the mounting deaths in their town, chalking them up to illness, coincedence and bad luck and completely oblivious to the evil that has them cornered.

The novel’s vampire, Kurt Barlow is no teenage girl's crush.  He is monsterously pale with red eyes and sharp fangs.  Barlow is a cunning predator – offering deals of power and answered desires to the townsfolk of Salem if they join him and happy to resort to using loved ones as barter and bait when deals can't be made.  Will all of the town fall prey to Barlow's powers? Will the four would be heroes survive? Gotta read to find out.

Want to spend even more time in Salem’s Lot, you're in luck.  In the short story collection Night Shift, King once again visits Salem’s Lot, in the prequel Jerusalem’s Lot and the sequel One for the Road.  There were two mini-series based on the book (one starring David Soul in 1979 and one starring Rob Lowe in 2004).