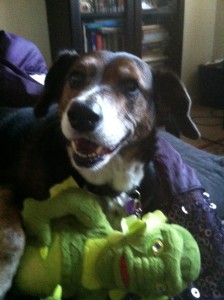 *Each month I will have a guest post from the Gothic Beaglet, Natacha.  Natacha loves creature movies and will be giving her unique take on what makes them her favorites.

For the record Mom is the reader, afterall she can actually read and has thumbs which makes turning the pages much easier.  Don't get me wrong, I enjoy books - I find them most tasty. 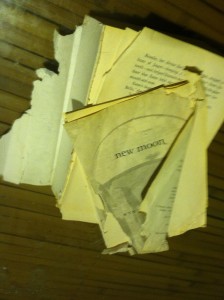 I prefer stretching out on the couch watching  movies, especially ones with handsome males in them.  While mom prefers lanky, pale hairless mostly human males with sharp teeth, I like big, hulking, furry manish beasts preferably with tails.  Larry Talbot (a.k.a. the Wolfman) is my kind of man/animal hybrid.  Woof! As  a human, Larry is tall and broad chested; and as the Wolfman he has a dog snout similar to mine and big hairy feet (and you know what they say about big hairy feet - they leave big hairy paw prints).   Jury is out on whether the Wolfman has a tail though.  I'm not sure why he wears pants and a dress shirt - personally whenever mom tries to put clothes on me I make sad faces until she takes them off.

Oops, sorry being a dog I'm easily distracted.  Released in 1941, The Wolfman remains a classic like Frankenstein and Dracula due in no smart part (like in those films) to the performance of its leading actor.  Lon Chaney Jr. was so convincing as the Wolfman that he went on to portray him in all of the 40's movies featuring Larry Talbot/the Wolfman -- Frankenstein Meets the  Wolf Man (1943), The House of Frankenstein (1944), House of Dracula (1945) and Abbott and Costello Meet Frankenstein (1948).  The legendary Jack Pierce did the makeup for the film, giving the Wolfman a look as frightening and  iconic as his other famous monster creations.

Part of the appeal of The Wolfman to the viewer is that he is a sympathetic creature.  Larry Talbot is a victim of circumstance - someone who while trying to perform a good deed is instead cursed.  He is confused and tortured when he discovers he is a murderous beast and tries to warn and protect those he loves.  But despite his conscience and his best intentions, his emotions are no match to his strong primal impulses once he changes.

Unlike his fellow monsters Dracula and Frankenstein, the Wolf Man was not a literary creation before he graced the movie screen.  And although the poem that is recited several times in the movie sounds like a wise old woman's warning to misbehaving children passed through time, it was an invention of screenwriter Curt Siodmak.

Larry Talbot and his hairy alter ego have since gone on to inspire writers.  In Neil Gaiman's Smoke and Mirrors short  story collection,  Larry, still a werewolf but now also a detective,  is featured in two stories -- one a humorous imagining of what would happen if Larry met H.P. Lovecraft's Innsmouth inhabitants and the other a sly nod to creature movies and Baywatch (you'll be surprised how peanut butter and jelly this combination is, swear).   The poem, with a slight alteration, is included in Florence & The Machine's song Howl, which brilliantly captures the um, primal urges of  new lovers.

Grab your favorite human, some snacks and curl up on the couch for an evening with The Wolfman.  But beware the full moon, say your prayers when the wolfbane blooms, and keep some silver bullets nearby just in case you get unexpected guests.